Home
Products
About Us
Factory Tour
Quality Control
Contact Us

Now countries in the world have taken a lot of encouragement policy for the solar industry, and implemented various government plans for a long time, such as “millions of green residential building plan” in Britain, "million of solar roofs plan" in American, "millions of roof plan" in Europe, the "sunshine roof plan" in Japan and so on. Countries have formulated some policies and regulations in different degree, and establish various target program of each stage.

1. It can enhance the aesthetics of the building. Adopting "roof tile" instead of the part of the building tiles on the original roof, it can not only further reduce construction cost, but also achieve the effect of waterproof and sunshade. It is integrated with the architecture and has unique and beautiful appearance. On the other hand, it also brings some tourism value.

2. Once photovoltaic power system is complete, it will greatly reduce the energy consumption of the building. According to the estimates, under the standard sunshine conditions (1000W/m2), installing solar power systems can get 130-180 watts of electricity per square. So buildings can use electricity generated by battery components for lighting, and after excess electricity can also pull it for the Internet, so as to get a little profit.

3. Photovoltaic roof is less pollution to environment, and can reduce emissions of CO2 largely. Experts predict that if the cumulative amount of solar cells reached 600MW, about 590,000 t carbon dioxide emissions will reduce annually. And according to the State Ministry statistics, per kilowatt hour requires about 350 grams of coal. It is generally known that coal is the main source of greenhouse gases, and solar photovoltaic power generation system will be able to reduce coal combustion.

1. Solar cell panel. This is the source of energy collection and photoelectric conversion. Generally we place the solar panel components on the roof or well-light wall, open areas.

4. Combined to the grid. It will combine the solar clean energy to the grid and transferred to the load side of the power grid.

7. Remote monitoring unit. It can realize remote transmission. Transfer the system power information, the micro inverter working status information and the fault information to the customer's remote monitory point. So information can cover local area network (LAN), or the Internet. Its transmission mode can be divided into wire and wireless. 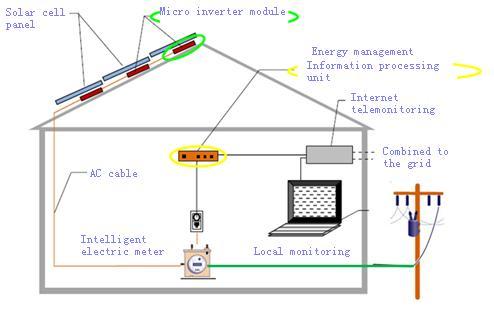